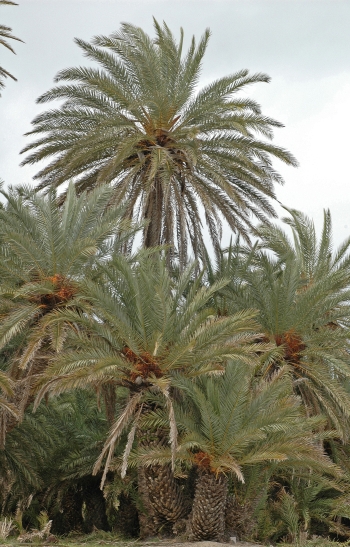 Phoenix theophrasti is one of only two native species of palms in Europe, the other being Chamaerops humilis of the W Mediterranean region. It was known already to Theophrastos, but long believed to be a primitive form of the cultivated date palm, being recognized as an independent species as late as 1967. It grows by sandy beaches and estuaries with a main population of several hundred trees at the “palm beach” of Vai in E Kriti. The small dates have a pleasant, sweet taste. Seeds germinate easily in damp coastal sand, and there is vigorous regeneration in the Vai population. Some additional small groups of trees occur elsewhere in the S Aegean area and in the Datça Peninsula of SW Anatolia.A
A. Dimopoulos, P., Raus, Th., Bergmeier, E. & al., Vascular plants of Greece: An annotated checklist. 31. 2013: p. 320 [Plate 2.8]