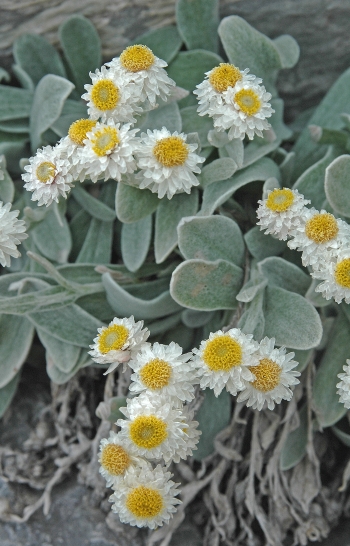 Helichrysum sibthorpii was first found by Sibthorp and Bauer on their ascent of Mt Athos on 11 August 1787, and subsequently described as Gnaphalium virgineum, aptly named after the Holy Virgin, the only woman on Athos. When later transferred to the genus Helichrysum, it had to change epithet for nomenclatural reasons and is now named after its discoverer. It is a rare local endemic, confined to crevices of limestone cliffs in the upper 100 m of the Holy Mountain.A
A. Dimopoulos, P., Raus, Th., Bergmeier, E. & al., Vascular plants of Greece: An annotated checklist. 31. 2013: p. 324 [Plate 4.6]