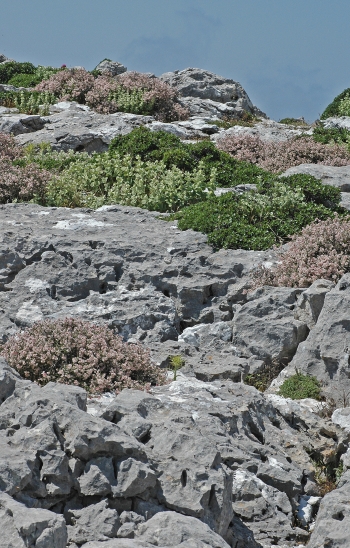 Atraphaxis billardierei is a widespread Irano-Turanian species with its W limit of distribution in Greece, where it is rare, occurring on dry, rocky limestone slopes at (600–)1000–1800 m in Kriti, Samos and Chios. There are several historical records from Mt Imittos by Athens, but the most recent is from 1864. It is a rigid, intricately branched shrublet with more or less scarious perianth segments, whitish at first but turning deep pink with age. The species was named after Jacques Labillardière (1755–1834), who participated in expeditions in the Near East and later, in 1791–1796, as a naturalist on the voyage of Captain d’Entrecasteaux to Australia. His biographer described him as abrasive, critical and extremely stubborn, tending to “hide everything that was good in his soul behind a caustic and bitter intellect”.A
A. Dimopoulos, P., Raus, Th., Bergmeier, E. & al., Vascular plants of Greece: An annotated checklist. 31. 2013: p. 354 [Plate 19.3]