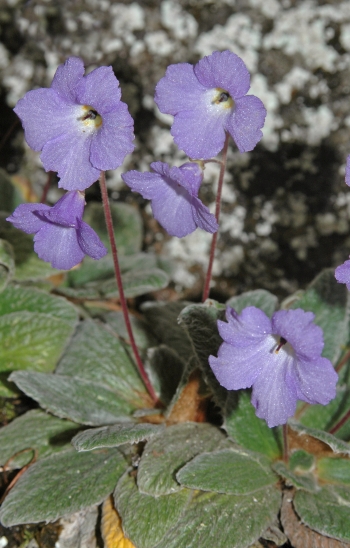 Jankaea heldreichii is a local endemic, growing in somewhat damp, shady crevices of limestone cliffs on the E and N sides of Mt Olimbos. In a letter to Edmond Boissier in Geneva dated 28 August 1851, soon after returning from his expedition to Olimbos, Heldreich reported having found “une Gesneriacée! (Haberlea Rhodopensis Friv.?), par malheur seulement en fruits”. It was described as Haberlea heldreichii. After flowering material had been collected a few years later it was transferred to the monotypic Jankaea (after Viktor Janka, 1837–1900, curator of the herbarium in Budapest). Gesneri­aceae is a mainly tropical family with only five species in Europe, four in the Balkan Peninsula and one in the Pyrenees, presumably all Tertiary relicts.A
A. Dimopoulos, P., Raus, Th., Bergmeier, E., Constantinidis, Th., Iatrou, G., Kokkini, S., Strid, A. & Tzanoudakis, D. 2013: Vascular plants of Greece: An annotated checklist. 31: p. 340 [Plate 12.8]

In previous floristic literature on Greece it was argued that the spelling Jancaea in the original publication of the genus must be regarded as an unintentional spelling mistake. In the protologue, however, Boissier deliberately wrote Jancaea and Jancaea heldreichii when dedicating the plant to Victor Janka. Hence the original spelling of Jancaea in 1875 was not a typographical error by Boissier but was clearly intentional, for he used Jancaea and the name of Janka, for whom the genus was named, each twice in the publication. One can only assume that Boissier used the "c" spelling because "k" was a letter rarely used in classical Latin. We do not know his reason for later revising the spelling to "Jankaea", but he may have been encouraged to make plain the eponymy of the generic name. A proposal in the 1980s (Taxon 32: 491. 1983) to conserve Jankaea with this spelling against Jancaea was not successful (Taxon 36: 76. 1987). According to Art. 60.1. and 60.9 of the Shenzhen Code (see Ex. 27 and Ex. 28 in https://www.iapt-taxon.org/nomen/pages/main/art_60.html), the original spelling of a name is to be retained and cannot be corrected under the present circumstances. Therefore, the name of the genus must be spelled Jancaea, not "Jankaea".