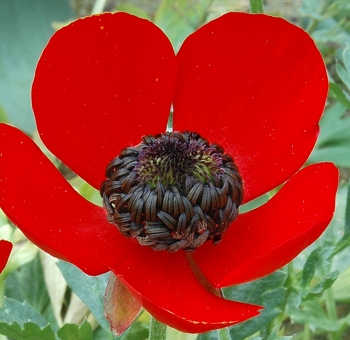 Ranunculus asiaticus is an E Mediterranean species, fairly common on Kriti, Karpathos and Rodos, with scattered localities elsewhere in S Greece. It is generally found in phrygana and fallow fields at low altitude, and is very variable in flower colour, with a certain geographical and ecological differentiation between the colour forms, the deep red form, for instance, tending to occur only in fields of traditional agriculture. Superficially resembling Anemone coronaria, which is similarly variable in flower colour, it has been cultivated in W Europe at least since the 16th century and many cultivars are known.A
A. Dimopoulos, P., Raus, Th., Bergmeier, E., Constantinidis, Th., Iatrou, G., Kokkini, S., Strid, A. & Tzanoudakis, D. 2013: Vascular plants of Greece: An annotated checklist. 31: p. 356 [Plate 20.5]