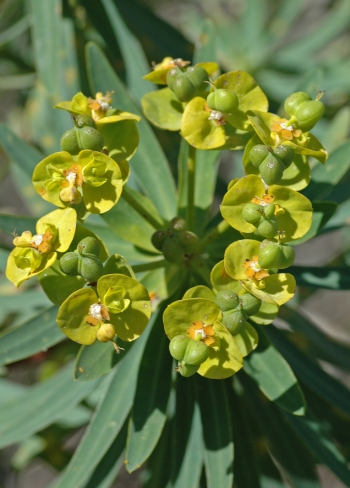 Euphorbia dendroides is widespread in the Mediterranean area. In Greece it is common, often dominant, on dry, steep, rocky slopes near the sea throughout the country (except in the far NE), forming neat, rounded bushes up to 1.5 m in diameter. It flowers in the early spring and is summer deciduous, often developing autumn colours and shedding its leaves already in May. The smaller, spiny E. acanthothamnos has a similar distribution in Greece, although its general distribution is almost confined to the Aegean area.A
A. Dimopoulos, P., Raus, Th., Bergmeier, E., Constantinidis, Th., Iatrou, G., Kokkini, S., Strid, A. & Tzanoudakis, D. 2013: Vascular plants of Greece: An annotated checklist. 31: p. 336 [Plate 10.8]