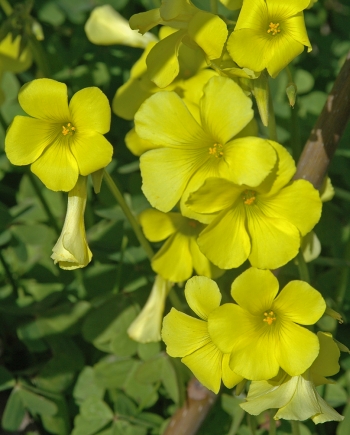 Oxalis pes-caprae, a native of South Africa, is a highly invasive species in many parts of the world with a Mediterranean-type climate, spreading by vegetative propagules and very difficult to eradicate once established. In Greece it is abundant, particularly in olive groves in the Aegean area, painting them yellow in the late winter and early spring. It has spread even to small islands and has presumably reached its climatically limited distribution area.A
A. Dimopoulos, P., Raus, Th., Bergmeier, E., Constantinidis, Th., Iatrou, G., Kokkini, S., Strid, A. & Tzanoudakis, D. 2013: Vascular plants of Greece: An annotated checklist. 31: p. 352 [Plate 18.4]