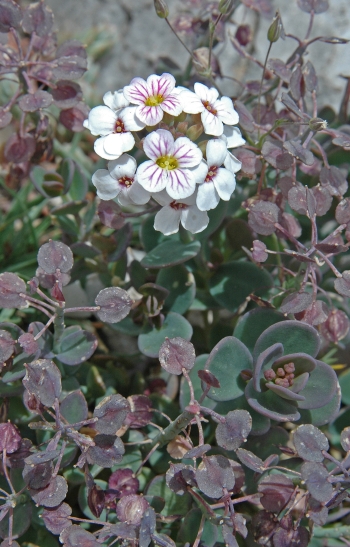 Aethionema orbiculatum is one of several local endemics found only in the summit area of Mt Athos (Agion Oros), where it was discovered by Aucher-Éloy in 1837. It is a small, bushy, woody-based perennial growing in crevices of limestone cliffs from c. 1700 m to the summit (2033 m). Based on rather poor, non-fruiting material, Boissier (Flora Orientalis 1: 337. 1867) referred a collection from Taigetos to A. orbiculatum, but when fruiting material became available much later this plant turned out to be very different and has subsequently been described as A. carlsbergii, a local endemic of Taigetos.A
A. Dimopoulos, P., Raus, Th., Bergmeier, E., Constantinidis, Th., Iatrou, G., Kokkini, S., Strid, A. & Tzanoudakis, D. 2013: Vascular plants of Greece: An annotated checklist. 31: p. 328 [Plate 6.7]