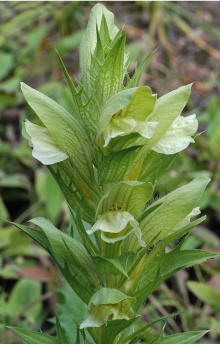 Acanthus greuterianus is a recently described species known only from a few localities in NW Greece, where it grows in field margins and other seemingly trivial habitats. It is likely to extend into adjacent parts of Albania and F. Y. R. Makedonija. Paler and less spiny than the widespread A. spinosus, it is apparently related to the Anatolian A. hirsutus and A. syriacus. The species was named after Werner Greuter (b. 1938), who made important contributions especially to the flora of Kriti.A
A. Dimopoulos, P., Raus, Th., Bergmeier, E., Constantinidis, Th., Iatrou, G., Kokkini, S., Strid, A. & Tzanoudakis, D. 2013: Vascular plants of Greece: An annotated checklist. 31: p. 318 [Plate 1.1]