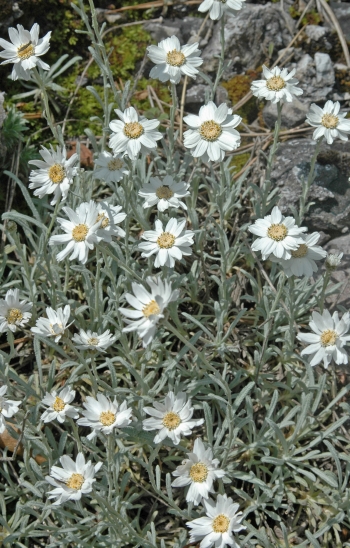 Achillea ageratifolia is unusual in the genus by having solitary capitula (rarely in small corymbs) and subentire leaves. It occurs in mountains of the C & S parts of the Balkan Peninsula, generally growing on rocky limestone outcrops at 800–2000 m. Two subspecies have been recognized, based mainly on leaf shape. The photo, from Mt Olimbos, shows subsp. aizoon, which has linear, serrulate leaves. The nominate subspecies, subsp. ageratifolia was illustrated on Plate 888 of Flora Graeca, supposedly based on material from Kriti. Its presence in Kriti is highly unlikely, and the plant was probably collected on Mt Parnassos, the southernmost locality for this Balkan endemic.A
A. Dimopoulos, P., Raus, Th., Bergmeier, E., Constantinidis, Th., Iatrou, G., Kokkini, S., Strid, A. & Tzanoudakis, D. 2013: Vascular plants of Greece: An annotated checklist. 31: p. 322 [Plate 3.4]