Dedication to the memory of A.A. Pulle

The completion of the fifth volume of this Flora brings the pleasant task of dedicating it to the memory of my former teacher in systematic botany, the late professor doctor August Adriaan Pulle, of Utrecht University.

As I have explained on a former occasion, descriptive botany and plant geography had since Miquel's time lost a great deal of attention and recognition. It is largely due to Pulle that scientia amabilis in Holland owes its remarkable réveil.

Stimulated in his turn by his teacher, our common, venerated professor of general botany, F. A. F. C. Went, who never failed to interest his pupils in tropical botany, Pulle focussed his attention first on the flora of Surinam and later on that of New Guinea. Through personal exploration in both countries he acquired an excellent field knowledge. Owing to his ability as an organizer and editor, and to long sustained hard work, his efforts gradually led to increased publication facilities. He soon gave up his own research work in favour of organizing the herbarium and library at Utrecht, and of his teaching, and succeeded gradually in attracting capable students for various sections of plant taxonomy and geography. His tolerant, sympathetic personality, his convivial students’ excursions in Holland and abroad, and his versatile and wide knowledge created a most agreeable working sphere in his laboratory. He varied the subject of his capita selecta for advanced graduates regularly: the course on plant sociology led D. M. de Vries to initiate practical plant sociology in Holland, that on phytopalaeontology led R. G. Koopmans to a thesis on the Netherlands carboniferous flora and stimulated F. Florschütz to initiate a centre for practical palynology of the Netherlands Pleistocene. Pulle’s main achievement materialized in raising a school of systematists, including the large majority of present Netherlands taxonomists who have jointly made research on the floras of Holland, the West, and the East Indies. The centre of research on the West Indies remained at Utrecht and found its expression in the Flora of Suriname; the centre for the East Indies was shared by the Bogor and Leyden herbaria. But he kept a vigilant eye on both all the time and in his most excellent address at the opening of the enlarged Utrecht Herbarium and Museum in 1938 he dwelt at length on ‘De inventarisatie van het erfdeel der vaderen’ (The inventory of our heritage).

Before I went to Bogor I was invited by Went and Pulle to a private talk on the subject of the future outline, coordination, and development of the work on the Malaysian flora for which they suggested in a general way that I should consider a very gradual planning of a final, regional Flora, with the emphasis on gradual as I had first to acquire a large pre-knowledge for this task. Neither of my wise tutors believed in ad hoc planning of long-range scientific objectives. In this way Pulle and Went can be considered as the mental progenitors of the initiative towards the present work. They were ultimately responsible for the magnificent body of biological research work performed by the best of their students in the former colonies. It is their everlasting monument, and our pride.

It is due to their education and wisdom that botany in the Netherlands has developed harmoniously, in both the descriptive and experimental fields. Their pupils who are now in leading positions have been impregnated with this ideal and will maintain it. This satisfactory situation of mutual appreciation has been decisive, I feel, for the joyful news just received that my country will be the first official body to grant funds to cope with the financial emergency with which our Foundation was confronted recently. I trust that this emergency will be temporary and that the Governments in the immense Malaysian area will appreciate the basic value of this Flora for the development of pure and applied botany for their peoples and will take a liberal share in the project. 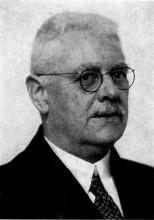