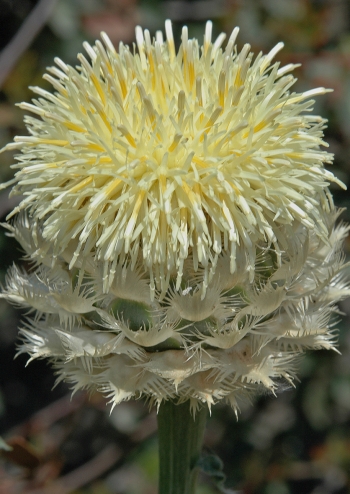 Centaurea lactucifolia is a spectacular local endemic of Rodos (and the adjacent small island of Chalki), aptly characterized by Boissier as “planta pulchra”. It is a stout perennial, growing in crevices of limestone cliffs at low altitude. The capitula are up to 7 cm in diameter and very characteristic with pale straw-coloured phyllary appendages and pale yellow (rarely pinkish) florets. It is a distinct species of uncertain affinity, but rather variable in spite of its restricted distribution.A
A. Dimopoulos, P., Raus, Th., Bergmeier, E. & al., Vascular plants of Greece: An annotated checklist. 31. 2013: p. 322 [Plate 3.9]