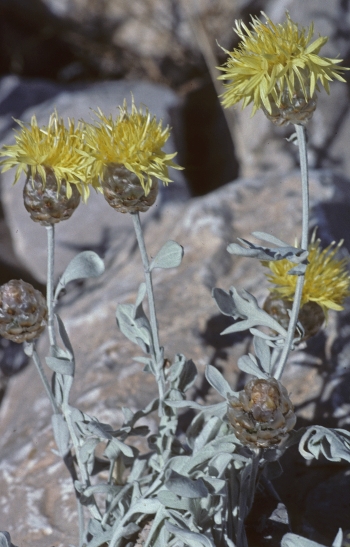 Centaurea musarum, “knapweed of the Muses”, is a distinct species first found by Orphanides on 15 July 1855 “in regione media montis Parnasso prope Clisto-Zasteno”. It was searched for in vain by several subsequent botanists and was long believed to be extinct. Having identified the somewhat obscure place name “Klistozasteno” (not appearing on any modern maps), Dionyssos Vassiliades re-discovered it in 1995 at or very close to its locus classicus. It grows in crevices of limestone cliffs at c. 1600 m, and the total population consists of a few hundred individuals.A
A. Dimopoulos, P., Raus, Th., Bergmeier, E., Constantinidis, Th., Iatrou, G., Kokkini, S., Strid, A. & Tzanoudakis, D. 2013: Vascular plants of Greece: An annotated checklist. 31: p. 324 [Plate 4.1]