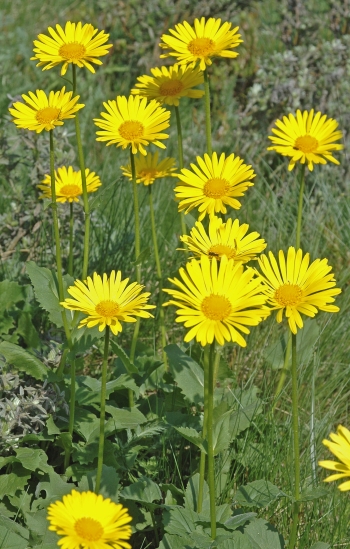 Doronicum orientale is a species of shady woodland and damp meadows in much of SE Europe and through Anatolia to Caucasus. In Greece it is widespread on the mainland and also found on some of the larger Aegean islands. It has a cylindrical, almost unbranched, horizontal rhizome with tufts of hairs, and is effectively a geophyte, dying down completely in the summer. In rocky habitats at higher altitude it is often replaced by D. columnae, which is a lower plant remaining green throughout the summer.A
A. Dimopoulos, P., Raus, Th., Bergmeier, E., Constantinidis, Th., Iatrou, G., Kokkini, S., Strid, A. & Tzanoudakis, D. 2013: Vascular plants of Greece: An annotated checklist. 31: p. 324 [Plate 4.5]

The change of the name is based on Hind (2019) who mentions that "critical examination and reading of the works in which the protologues were published has led to the conclusion that Doronicum caucasicum M. Bieb. was published earlier than D. orientale Hoffm., but it is highly likely that the two names were based on the same Adams collection that Adams had annotated as Doronicum orientale".